Mass with the Pope

It might be the only mass I attend with the pope while I’m here. Today was the Feast of the Presentation of the Lord, also proclaimed by the pope to be the Day of Consecrated Life. The pope celebrated mass for all religious women and men, and they were represented abundantly at St. Peter’s for the 5:30 pm liturgy. It was not the Sunday vigil mass, so I still have to go to church tomorrow, and with me everyone who was at church tonight. No, I am not complaining. Just stating the cold hard facts, people. Get over it.

When we got in line at the colonnade, the sky was starting to clear after what was essentially an overcast day. It was 4 pm, and mass was not to start for another hour and a half. Besides, it was windy and I should have taken my thicker coat and my knit cap. It’s a good thing I have a thick head of hair … and some would say a thick head to go with it.

Once past the metal detectors and x-ray scanners, we were directed around the right side of the basilica (by the stairs that led to the dome) where we entered through a door that put us to the right side of the main altar (as seen from the main aisle). Lots of steps, not handicap accessible at all. I guess they have to go another route. Either that, or you’ll need a stretcher and four of your closest friends to carry you in. We had plastic chairs, not padded, but not bad. And as it turns out, you just don’t concelebrate with the pope. I’m sure those who do would have been invited for the occasion. Priests who will distribute communion have to bring a cassock and a special ticket that grants them the privilege. Five such tickets were handed out to us, those among us who brought a cassock. Needless to say, I sat in the assembly with my camera blessed by the pope (ha!).

We took our seats and were surrounded by lay people, a bunch of sisters, and seminarians in black cassock and surplice, typical church crowd for St. Peter’s, I suppose. There were no ushers walking the aisles, so whenever a seat was available up front, someone would rush up and take it, leaving their seat empty. And the game would keep going all the way to the back, people moving up from the back whenever a seat was available up front. Now picture that with a dozen people at a time … mostly sisters. It was like watching people scramble for the good seats at a rock concert, not at all like church. Not at all like church back home, where people scramble for the back seats first. (Hint, hint.)

When the pope finally came up the aisle, I was able to snap a few photos at the beginning of mass. Now, you all know how short I am. Surprisingly, I had no trouble getting good shots.

Mass went on as usual, I suppose, the usual way masses go with the pope. The dialogues were in Latin. (The Lord be with you. And with your Spirit.) The first reading was in English, the second in Spanish, the gospel in Latin, the prayers of the faithful in Italian. We had books, so we could follow along in the major languages, as well as the Gregorian chant. The schola was excellent, even from where we sat. And I’m sure they do that all the time.

After mass, on our way out, we were able to take a few more photos. I would post many more but the internet service here is hiccuping a lot and taking a really long time. I’ll have to post the rest of them when I get home. You just get the bare essentials for now. 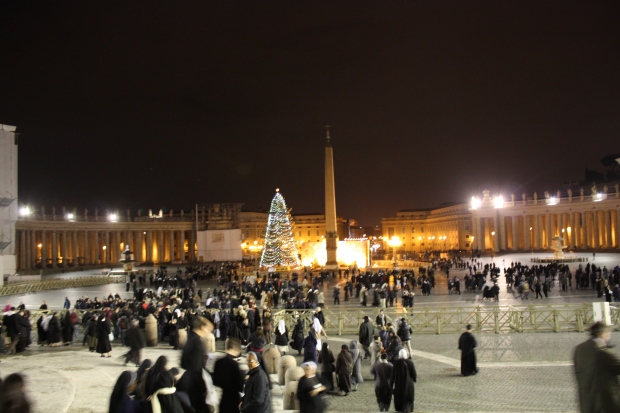 Out the main doors into the piazza.

Looking back from the piazza.

I had dinner with Msgr. Ray Dreiling from Fresno CA down at the Piazza Ottaviano. We didn’t see any clergy around. I hope we didn’t scare any of the other patrons by breaking some unspoken protocol … but within a stone’s throw away from the Vatican, it should be fair game. Spaghetti Bolognese. Now I know what it’s supposed to taste like. But then again, every Italian family has their own recipe … as well as all who claim no Italian connection whatsoever.