Missionaries to Our Own People

I am a priest from the diocese of Richmond in Virginia, the United States. Fr. Kerry here is from the archdiocese of Sydney in Australia. We have been talking as we travel your beautiful country. And in our conversations these past few days, we have talked about the Christian faith in Ireland. When we arrived last evening and especially when we saw the hymns we will be singing, we marveled how we recognized most of them, because we sing them at home as well. And I thought, “Well, this is where these hymns come from … most of them anyway.” And we acknowledged that the faith we grew up with came to our native lands through the labors of missionaries.

The gospel reading today is often used to remind us of those sent to bring the gospel to mission lands. And both in the Philippines where I grew up and in the United States, and in Australia, the Christian faith arrived through the hard work of missionaries from Ireland, from Italy, from Spain, from Belgium, from France, from countries that have been Christian for so long, and are now experiencing a sort of shortage of missionaries. We read this scripture passage, and we are told that missionaries are still being sent. But now these missionaries are you … and me. And we do not have to go to foreign countries and far-away places to proclaim the Word. We can proclaim it right here, because this is where the Word is most needed. We might never know what it was like for those early missionaries, having to learn a different language, having to live among a different culture, sometimes not really knowing how to adjust to it. And somehow we experience the same exact thing right where we are, among our own families, with people we think we know, but we find we cannot communicate with because they speak a different language, and live a different culture, and we don’t know how to break through that communication barrier.

As missionaries who went to foreign countries from Christian Europe learned eventually, we realize we can’t impose our own culture on others in order to bring them to Christ. If they had managed without Christianity for so long, they probably would have done just fine. But the missionaries had to understand the people first, their story, their culture, their language. It took them many years before the local population was brought over to Christ.

Amos in today’s first reading reminded the people who were telling him to stop preaching, that he didn’t really want the job to start with. God told him to do it. He would have been just as happy being a shepherd and dressing sycamore trees. Instead, God had something else in mind for him. And God sent him to Israel to proclaim his Word.

Every so often people ask me why I enjoy working with young people. I say it’s because at some point, they go home. But really, I believe that if the only thing young people pick up from my interaction with them is my love for what I do, my love for my vocation, they might consider doing something similar with their own lives. No one looks to a grown-up who is always exhausted, short-tempered, and unhappy and says, “That’s what I want to be when I grow up.” No. They look at people who are energetic, who are happy doing what they do, who are inspired. “There’s a career I might consider. There’s somebody I might want to imitate.” And if we live our faith with joy, that our young people and others see, they might say, “That’s an option for me.”

So Pope Francis reminds us that the gospel is not a cross to bear, but rather it is a joy to live. In our living of that gospel today and the days ahead, might we remember that we are proclaiming God’s good news, and as we do so, we are missionaries, right here in our own culture, right here among our own people. 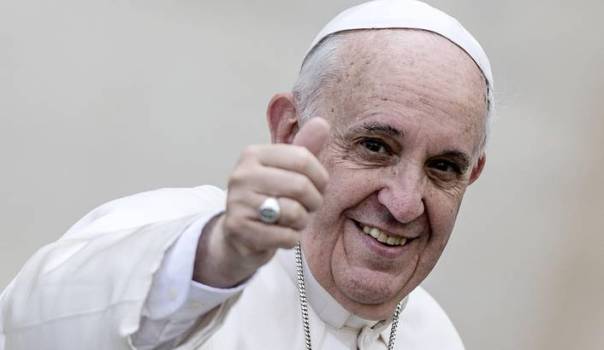