Fr. Kerry and I met my parents, my sister Fina, and nephews Nathan & Ian, at Doc Taylor’s on 23rd Street for breakfast at 730am Monday. We wanted to beat the crowd, and get my sister to drive us back to the hotel. We would then catch the shuttle to the airport at 12 noon, for our 2:30pm flight. We expected airport security to be vigilant. But Fr. Kerry was singled out for a random check. I was afraid that would happen to me, as I was carrying a few electronic pieces in my backpack. And when we finally made it to the gate, where we waited for a little over an hour, security came by again and asked to look into our bags. I wondered if it was a sign of things to come.

While we sat waiting, I took out the mass intentions I asked parishioners to share anticipating the mass we would celebrate at the Basilica of St. Peter in Vatican City the morning of Friday, 7:30am local time. I had to pause a couple of times as I read the prayers many people had me take to one of the holiest shrines of our faith. Many of them were for family members and friends, named and unnamed, for departed loved ones, for the healing of physical illnesses, for reconciliation, conversion, spiritual renewal, strength, courage, patience, peace. A few were in thanksgiving for blessings received, as well as blessings yet to be received, for the church community of St. John, and a safe trip for us. I was profoundly touched by the thought that I had been entrusted with the deepest and most intimate concerns of many people. Right at that moment, I prayed that God bend an ear. I would take out those cards many more times in the days ahead. Suddenly, my prayer that I would drop a few pounds with all the walking and the sensible eating (I will need your prayers for that one) seemed so inconsequential. 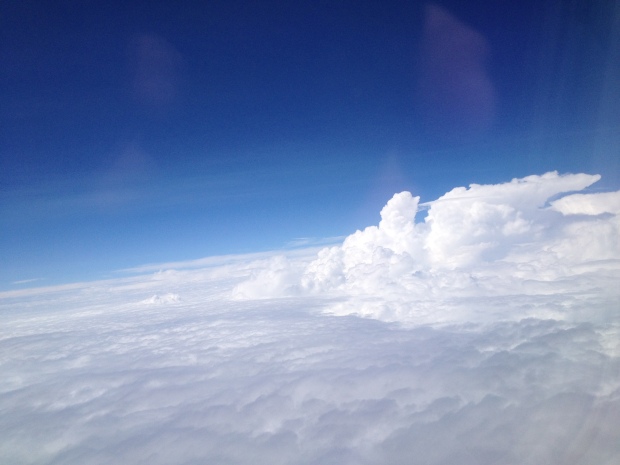 Skies above New Jersey on the way to New York JFK.

Freedom Tower rising above the Manhattan skyline in the horizon.

When we arrived at New York JFK, we had to wait a couple of hours. We had dinner at the food court before finding our gate. And the plane took off an hour late. But we didn’t make other plans, so that was fine. Initially, I looked online for a seating layout for the 767-300 to see where we would be sitting. The flight, booked in Sydney, was listed as British Airways. That seating plan put us in Business Class! It was too good to be true. But since in New York the flight was listed as American Airlines, I looked again, and found the AA seating layout, which had us sitting in the first row of Economy Class. Bummer. But it would have been a pleasant surprise.

Our actual seats were 10H & 10J, the first row of Economy Class.

We arrived at Fiumicino International Airport in Rome at about 10:40am Tuesday. The limousine service Fr. Kerry arranged ahead of time was there to pick us up. We weaved through the streets of the city, a journey that made my heart skip several times. I would never imagine driving here. I was amazed not more cars were banged up, the way people drive around here. Eventually we arrived at Domus Australia, the guest house built by the Australian Bishops Conference in the heart of Rome, which opened in October 2011 to house pilgrims from Australia primarily, and offer them a slice of home in a far-off land. We will be staying through next week. We fly out to London Heathrow on Wednesday.

The Google path from Fiumicino Airport to Domus Australia … but I think we took another, just as complex.

Home for a week in July. 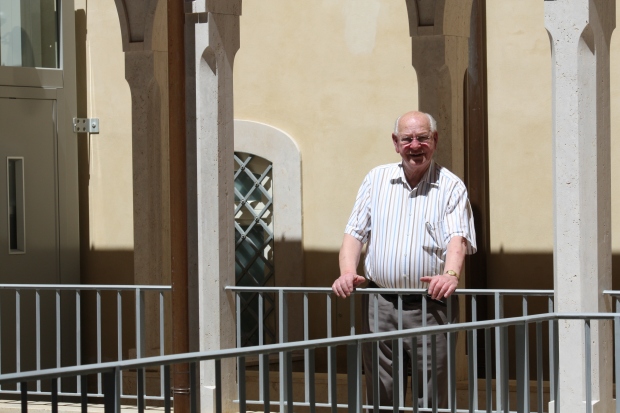 The good Monsignor in the courtyard of Domus Australia.

Piazza de Republica. They have lots of Smart cars running around the city. And how they drive those little cars!

Today we made our first foray to Vatican City. We wanted an idea of what we would have to deal with on Friday, where we would enter the basilica (apparently there is a special entrance for priests celebrating mass), how long a bus/metro rail ride to get there, how warm it would be since we are going to be in black all day. Before our bus crossed the Tiber at the Ponte Vittorio Emmanuelle II, we caught sight of Castel Sant’Angelo (Mausoleum of Hadrian), an impressive fortress just outside the Vatican, and the dome of St. Peter’s Basilica above the skyline. We turned left onto the Via della Conciliazione and St. Peter’s was right before us.

As we walked into the piazza, I had to stop and take a picture or two. I was very impressed. I reminded Fr. Kerry what I said when I first saw the Sydney Opera House on my Australia trip in 2004. I said it looked smaller than I imagined it. We laughed. St. Peter’s on the other hand was truly imposing. I guess that’s what happens when you enter the piazza with the colonnade like enormous arms reaching out to embrace the world. He pointed out the cleaning of the stone that was going on, a couple of portions of the colonnade draped in canvas and scaffolding. 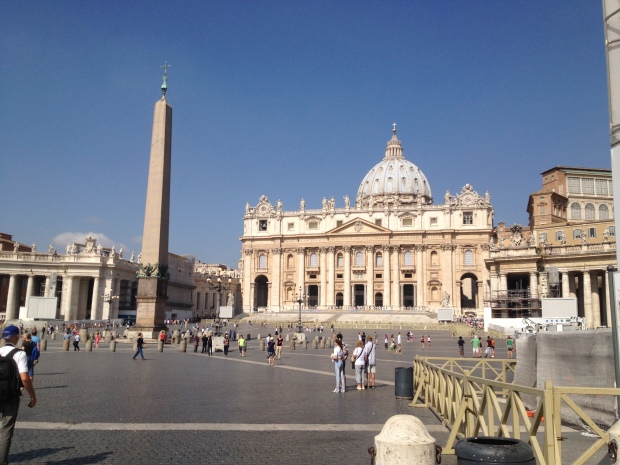 The piazza as we enter the walled city, seat of the once formidable Papal States, now a major destination for pilgrims, the searching, and the curious.

We made our way to the gift shop to pick up some stamps. I was mailing my thank you cards from the anniversary celebration from the Vatican. It just seemed like a cool thing to do. Now I just have to get those cards out before we leave next week.

The sun beat down on us hard all day, sapping us of strength. We visited the Spanish Steps and the Trinita del Monti, then a quick lunch at D’Angelo Café on Via d. Croce. As we walked around the neighborhood, we saw the Basilica of Santi Ambrogio e Carlo on Via del Corso. We spent a few moments in prayer, and I took out the cards again.

Spaghetti alla Bolognese for lunch at D’Angelo Cafe. So far, pasta at every meal … not good.

Above the main altar at Santi Ambrogio e Carlo on the Via del Corso.

One amazing find was the relic of St. Charles Borromeo’s heart in a chapel behind the main altar.

Reliquary of the heart of St. Charles Borromeo.

Then we took the Metro back to Domus Australia. We walked a few blocks from the Metro stop to the guest house. Now I know why Romans take an afternoon siesta. I was going to need it. Tonight, a simple meal on the guest house terrace. We had a little adventure today as well, but I’ll let Fr. Kerry tell that story. If you’re reading this in Waynesboro, I’ll tell you when I get home.