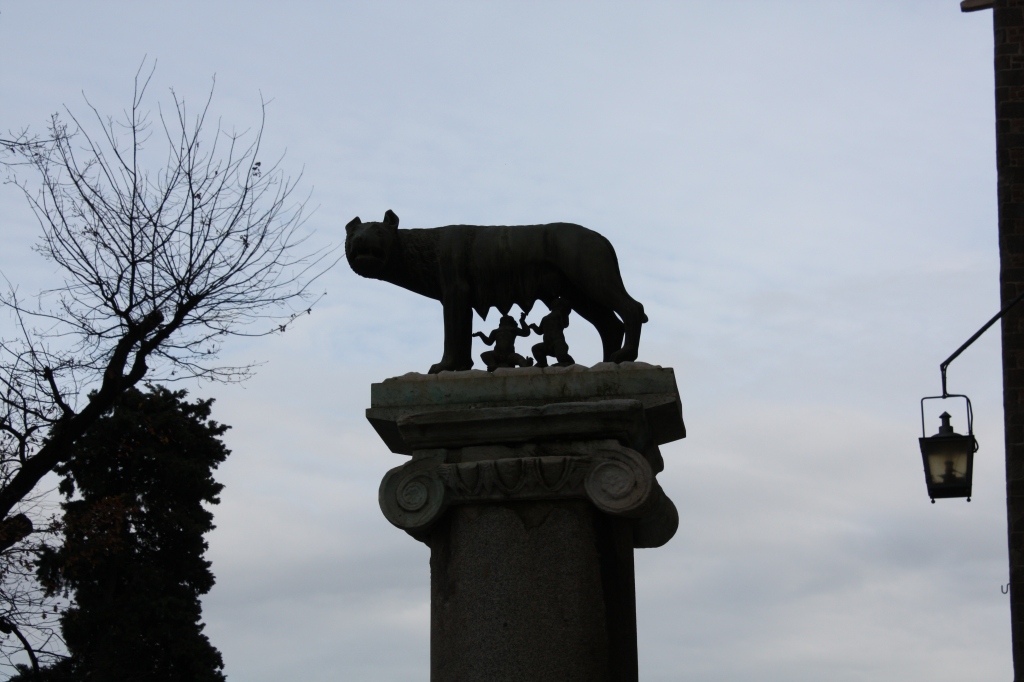 Symbol of Rome: Romulus and Remus being nursed by the she-wolf.

It was our one free day in Rome before heading up to Assisi and Florence. So we arranged for the tour bus to leave from the hotel at 9:00 am, and drop us off at one of two stops–the Piazza del Popolo or the Piazza di San Pietro. I went to bed the night before after setting my alarm clock … and slept right through it the next morning! Lois called my room just before 9:00 am, since no one had seen me at breakfast. As I opened my eyes to see light streaming in through the drapes, feeling just a little more relaxed than usual, it occurred to me I just slept through my alarm. No worries. I told Lois to tell Debra (tour guide) and Luigi (bus driver) to leave without me. She offered to take the Metro with me into the city when i was ready. And without the pressure of keeping everyone waiting, I showered, dressed, and came down to breakfast. Some of our group were staying close to home base that day. So I didn’t feel too bad for sleeping in.

We took the Metro from Termini (named after the baths–Terme–of Diocletian close by) to the Ottaviano station, a short walk to the Vatican. I had hoped to spend some time in the Basilica di San Pietro, since we didn’t have any free time the day before. But the line going into the basilica by then was weaving around the piazza to where visitors usually exit. And it was only 10:30 am! So instead we visited the souvenir shops and book stores that surrounded the piazza. I was looking for memorabilia for the upcoming canonization of Blessed John XXIII and Blessed John Paul II. They would come in handy.

Then we started heading down the Corso Vittorio Emmanuel in the direction of Piazza Venezia where we would meet the bus at the Vittorio Emanuele II Monument (L’Altare della Patria) at the end of the day. Initially, we had made plans to visit a specific gelateria in the north end of the Piazza Navona. But we took a couple of wrong turns, and ended up at the Pantheon, where we went ahead and found a restaurant and had a bite. I wanted to visit the Campo dei Fiori and the monument to Giordano Bruno, but it was way south of where we were by the Pantheon at the time.We returned eventually to the Corso and passed several churches: most notable among them the Chiesa Nuova (Santa Maria in Vallicella), the Basilica di Sant’Andrea della Valle,  Santa Maria sopra Minerva down from the Pantheon, the Basilica di Sant’Agnese in Agone (in Piazza Navona), and the (Jesuit) Chiesa del Gesu.

We got some gelato as we neared the Campidoglio and spotted Marta & Jim. So we walked together up the staircase to the Piazza Campidoglio and the Basilica di Santa Maria in Aracoeli.

Piazza Campidoglio. Designed by Michelangelo in 1538 and flanked by stately palazzi , this elegant hilltop piazza is one of Rome’s most beautiful squares. You can reach it from the Roman Forum, but the most dramatic approach is via the Cordonata , the graceful staircase that leads up from Piazza d’Ara Coeli. At the top, the piazza is bordered by three palazzi : Palazzo Nuovo to the left, Palazzo Senatorio straight ahead and Palazzo dei Conservatori on the right. Together, Palazzo Nuovo and Palazzo dei Conservatori house the Capitoline Museums, while Palazzo Senatorio is home to Rome’s city council. In the centre, the bronze equestrian statue of Marcus Aurelius is a copy. The original, which dates from the 2nd century AD, is in the Capitoline Museums. (from http://www.lonelyplanet.com)