We left for Vatican City around 6am. We entered the piazza a little after 6:30. It was peaceful, deserted but for a few early risers. We took the side entrance to the sacristy, where we were saluted by Swiss guards and other law enforcement. Fr. Kerry and I agreed no one has ever saluted us before. Okay, maybe the Knights of Columbus … but they don’t dress nearly as eye-catching, even with plumes and swords. Sorry, Melsee … When we arrived at the door of the sacristy on the second floor, there were many other priests waiting at the still unopened entrance. At 7am sharp, the door opened, and we walked into a room bustling with activity: clerics assisting with vesting priests, altar boys dressed in purple cassocks and white surplices being deployed in pairs with wine and water cruets and liturgical books ahead of vested celebrants to their respective side altars. It took us a while to gain our bearings, since everyone but us seemed to know what to do. Some altar servers approached us with amices, albs and chasubles. We complied without question. And soon we were following two of them into the grottoes, the chapels beneath the main floor. We were assigned the Irish Chapel. I’m sure that was where we were. We had no way of knowing. But upon observation of the picture below, I noticed the altar was dedicated to Sancto Columbano, Abb. Hibernorum Natio MCMLIV.

There were three other people in the assembly that morning besides the altar servers (Luke and Andrew), two non-English speakers, and a Dominican sister from North Carolina. She said she comes often to mass in the grottoes, always keeping an ear open for an English mass. I guess the schedule isn’t published. That was why she said she came late.

I recalled the intentions that many parishioners sent with me on this trip. I am extremely fortunate to have had this privilege of celebrating mass at St. Peter’s. This would be a day of many firsts … This was a great way to get started. 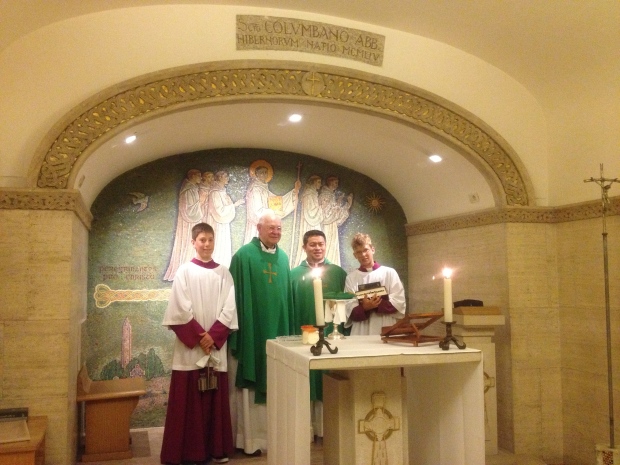 After mass, we headed back into the Basilica where we spent the next few hours.