A Night in Assisi

We hit the road the morning of Friday 3 January for Assisi, home to Francis and Clare and their humble companies of religious men and women. Our first stop at the end of a roughly 3 hour trip was the Basilica di Santa Maria degli Angeli “in the plain at the foot of the hill of Assisi. … constructed … between 1569 and 1679 enclosing the 9th century little church, the Porziuncola, the most sacred place for the Franciscan family. It was here that the young Francis of Assisi understood his vocation and renounced the world in order to live among the poor and thus started the Franciscan movement. (from Wikipedia)

I have further information from a previous blogpost of an earlier trip to Assisi in February of 2013. I didn’t want to bore you with the same information, so you can catch it at this link: (www.https://middlechildcatholicpriest.com/2013/02/25/weekend-in-assisi/) There were a few things I saw for the first time, and a few things I made it a point to see again.

Around Christmastime they have a tradition at the basilica to display nativity sets from around the world. Many countries were represented more than once. But it was endearing to see how simple sometimes, how elaborate sometimes, these depictions were. Some of them looked like miniature train sets complete with mountain ranges, rivers and ponds, towns, villages, herds of sheep and cattle, fields of wheat and corn, farmers, churches (?), children at play … and right there in the midst of all that human activity, a baby in a manger surrounded by his parents, some shepherds, and the wise men from the East.

There was even a life-sized nativity in the center of an open courtyard with several displayed along the covered porticoes. Some were made of straw, some of clay, some of wood, some of wire and bits of felt. Some were made from ears of corn propped up on sticks. I even thought I saw one made of beanie babies. Anyone remember one made of teddy bears, or was I imagining things? 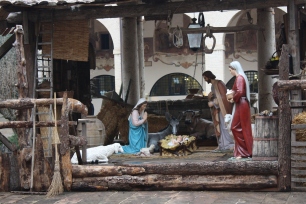 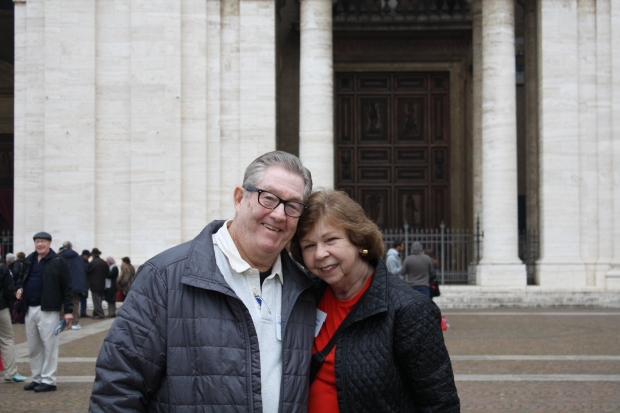 After a short ride up to the city proper through the eastern gate by the Basilica di Santa Chiara, we dispersed for a bite to eat. Some of us found little coffee and sandwich shops. But no! I led a small party up a narrow alley to find some nice little ristorante off the beaten path and get a taste of civility for a change. It didn’t occur to me till just now that most visitors and tourists do not spend the night in the city, but rather in the valley below, by the Basilica di Santa Maria degli Angeli. So it makes sense the noon meal would be their big meal. Even the soup on the menu was so thick I could stand my spoon in it. Don’t get me wrong. It was good. But it was too much only a few hours from a big dinner back at the hotel.

After lunch, we met our city guide in the Piazza di Santa Chiara. We got a little history lesson about the San Damiano cross that hangs permanently in a side chapel of the basilica. Then we went down into the crypt to see personal effects of Francis (brown robe, gloves worn over stigmata, rope belt, breviary) and Clare (bridal gown, hair, books, shoes), and the incorrupt body of Clare of Assisi. No pictures allowed. But I think I posted one from the web in that other post from a year ago. 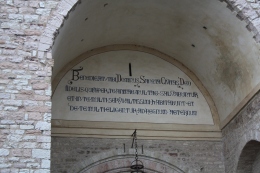 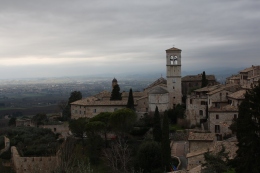 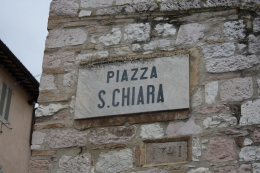 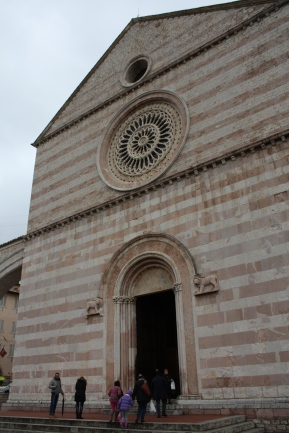 The tour took us to the Piazza del Comune down some narrow winding cobblestone streets all the way to the Basilica di San Francesco on the west end of the city. Only residents are allowed to drive a car in the city, and not every resident qualifies for a permit. So people do a lot of walking. Buses park at both ends of the city to pick up and drop off. 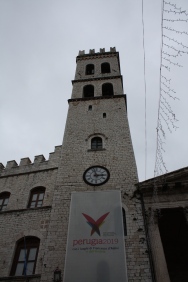 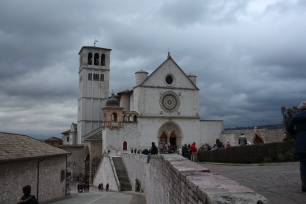 On the way out the city through the western gate, a glance back at the basilica was a reward in itself.

And after dinner, a small group of us returned to see the city after dark. I would have loved to spend the night in the city like last time. There’s just a whole different flavor to the experience. 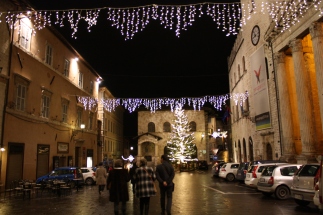