Queenstown is a major centre for snow sports in New Zealand, with people from all over the country and many parts of the world travelling to ski at the four main mountain ski fields (Cardrona Alpine Resort, Coronet Peak, The Remarkables and Treble Cone). Cross country skiing is also available at the Waiorau Snowfarm, near Cardrona village. (Wikipedia) Of course, we didn’t do any of that. But the place was quite busy when we arrived on Wednesday, 9 July. It seems schools are out on winter break. Students return to school in Sydney on Monday, 14 July. 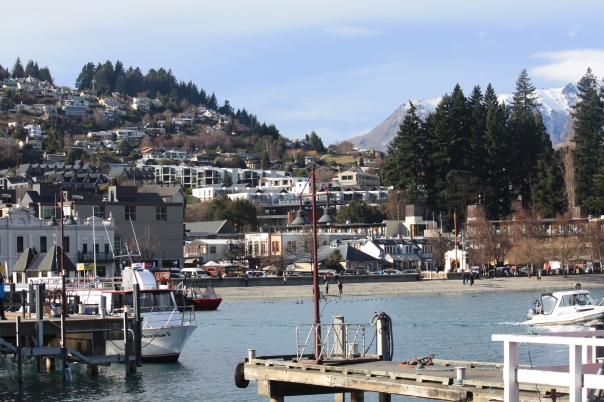 And most spectacular on the horizon are the Remarkables, one of only two mountain ranges in the world that allegedly stretch directly north to south. The snow-capped peaks are featured in the Lord of the Rings trilogy (particularly the Two Towers) where the Golden Hall of King Theoden stands in the city of Rohan. The props have since been taken down from Mt. Sunday in Canterbury. But the view is still spectacular. We didn’t get to see it this time. Prices have gone up … way up. But I took tons of pics all the way from Greymouth to Queenstown and back to Christchurch. And if I only skied, it would have been even more spectacular.

I know I will have to post more pics when I get back to Sydney. Wifi access is expensive. I know I’m spoiled with my access back home.

We head out to Hanmer Springs in a few minutes on this bright sunny Sunday. We went to mass at Sacred Heart Church in Addington last evening–a big Filipino community there. But we didn’t spend a lot of time immersing in the local culture. Nice to see a lot of active lay folks. And sitting in the assembly for a change is very refreshing. I get to see and critique (with kindness, of course) someone else’s style. I know there are and have been members of the clergy in my congregation. It takes a truly exceptional experience before I reveal my true identity. Because then everything changes. I suppose they don’t just make themselves known as easily either. And it has never been such an experience to warrant the bishop hearing from them, for which I am grateful. Not that I have done anything worth letting the bishop hear about … stay low on the radar, that’s what I say.

So we head back to Sydney tomorrow. I’ll post the rest of my pics from there. Toodle–oo.