We set out for Killarney (Cill Airne) after a hearty Irish breakfast. The place is swarming with cars and people in red and white or green and white. We thought we’d get a castle in before finding parking in the city, so we headed off to Ross Castle, a 15th century castle just a short drive west of the city centre. 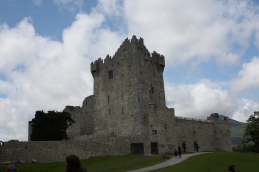 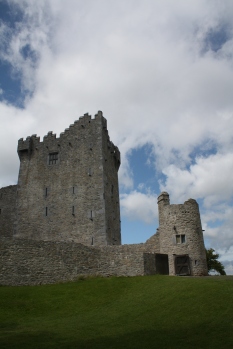 From http://www.killarney.ie: “Built in the late 15th Century by one of the O’Donoghue Ross Gaelic Chieftains, Ross Castle has had a long and distinguished history. This typical Irish keep is built on a rocky outcrop on Ross Island by the shore of Lough Leane. Although not a large fortress, its profile and location make for an imposing structure and it has proved to be a very effective defensive stronghold throughout the centuries.” The next scheduled tour wasn’t happening for another half hour, and it was about lunch time. So we got back on the road and saw signs for the Ring of Kerry. 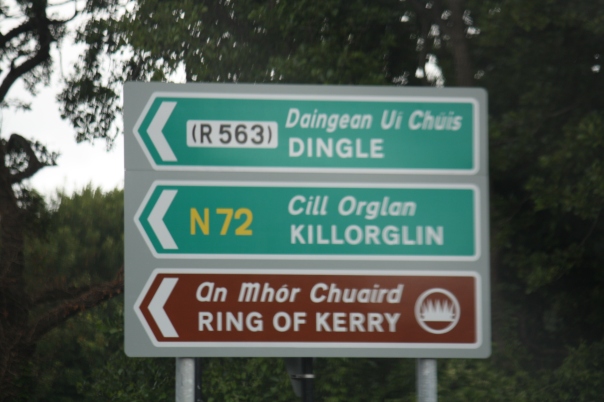 It was sprinkling intermittently, what Fr. Kerry calls “a soft day.” So we didn’t see a whole lot. From http://www.lonelyplanet.com: “The Ring of Kerry is the longest and the most diverse of Ireland’s big circle drives, combining jaw-dropping coastal scenery with emerald pastures and villages.The 179km circuit winds past pristine beaches, the island-dotted Atlantic, medieval ruins, mountains and loughs (lakes). The coastline is at its most rugged between Waterville and Caherdaniel in the southwest of the peninsula. It can get busy in summer, but even then, the remote Skellig Ring can be uncrowded and serene – and starkly beautiful.”

We stopped for a bite at the Olde Glennbeigh Hotel, 35km west on the Ring. But since the entire length was 179km, we decided to head back to Killarney. On the way back, we stopped at the Kerry Bog Village Museum. Not much there really, just a couple of ponies and a lot of dried peat ready for burning as a source of fuel, like coal. 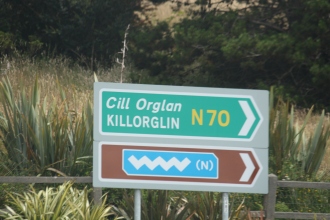 And as we drove back into Killarney, it seemed so much busier still. Every parking space on the street was taken. And crowds in green and white and red and white were streaming down in one direction, we presumed toward the stadium for the 7PM game. But it was only 3PM! So we tried to find the Cathedral of St. Mary, hoping we would find space in their lot. Well, it seemed a wedding was just letting out. We found space and came around the side to behold a magnificent structure. 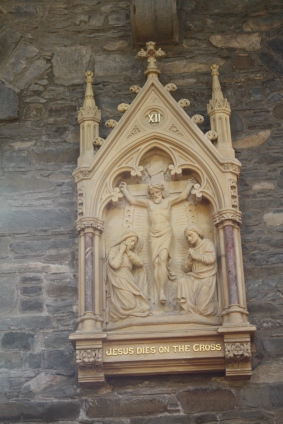 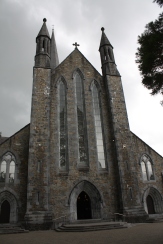 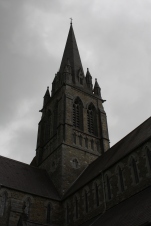 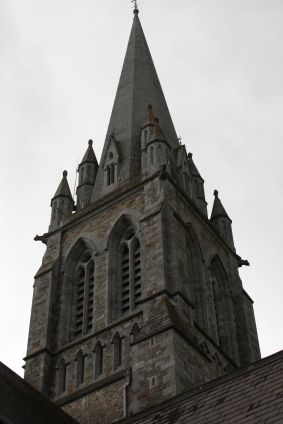 I wondered about the colored lights in the sanctuary. It did look a little Christmas-y, but maybe it was something else. We walked around and admired the unfinished walls and arches, then sat down for a short prayer. I loved the tabernacle in the sanctuary. It looked like a carved square stone pillar, light shining through openings in all directions and upward. Now there’s an idea to take home.

Then I wondered if we should just stay for the 6:15PM vigil mass, being Saturday. We were going to drive to Dublin all day Sunday, as we were flying out on Monday. But the cathedral parking lot was full of cars of people who were going to the game, instead of mass. Would mass be shortened or cancelled? I couldn’t imagine they’d do that in Ireland. But when we inquired as some people were tidying up from the wedding just done, mass would take place as scheduled. And they would be happy for us to concelebrate. It was a fitting conclusion to our trip–mass at St. Mary’s Cathedral in Killarney. So we took a stroll into town and returned to the cathedral in time for mass.

The presider was Fr. Niall, who graciously welcomed us at the beginning of the liturgy, and mentioned that in the spirit of ecumenism, the cathedral was commemorating the colors of both teams playing in Killarney that evening, the host County Kerry in the green and white, the visiting County Cork in red and white. The liturgy was simple, the music magnificent with pipe organ and a young man serving as cantor. And we ended promptly at 7PM, said our goodbyes and entertained thoughts of dinner.

As we were walking back to town, I shared my concerns with Fr. Kerry. We should get out of town now before the game lets out, or we will never make it back to Kenmare at a decent hour. So we decided to catch dinner in Kenmare instead, after a wonderful ride through the Killarney National Park alongside Muckross Lake and through Moll’s Gap on the N71 (Ring of Kerry).

It was during dinner that we heard Kerry won its 77th provincial title. And contrary to some expectations, there was no rioting in the streets.