Although I am back home in Waynesboro, I did have a few more photos to share.

After a full day visiting Hobbiton in Middle Earth, we went to soak in the mud pools of Hell’s Gate. Yes, that’s what it’s called. The most popular hot springs in the north island is reportedly the Hell’s Gate Geothermal Park and Mud Bath Spa in Rotorua. It started out a cool and overcast day. By the time we headed out to soak after lunch, the sun was peeking through the clouds and the wind had picked up, but was still mild for a winter day. We didn’t know when people usually came to the spa, and discovered on our way out that most came in the late afternoon, probably after a long day of hard work and sport, except that most of them looked like tourists on vacation like ourselves, who avoided lifting heavy objects and breaking a sweat if they could help it.

A huge portion of Hell’s Gate was the geothermal park, a sprawling landscape of steaming pools of sulfur water. Not quite Mordor, but close. 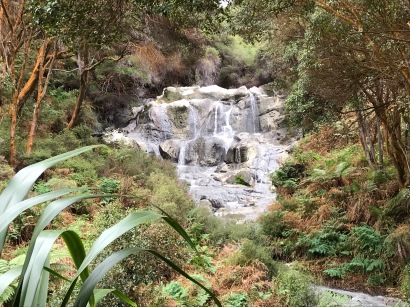 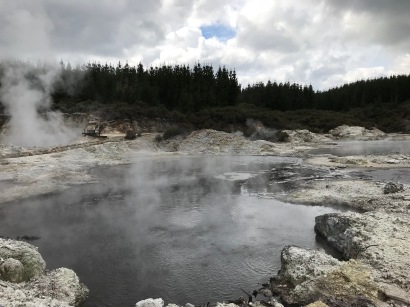 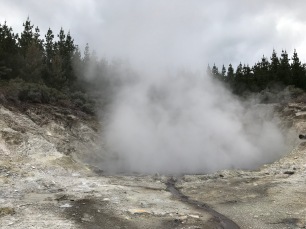 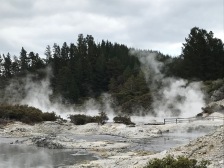 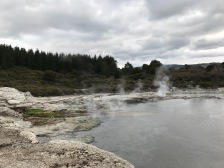 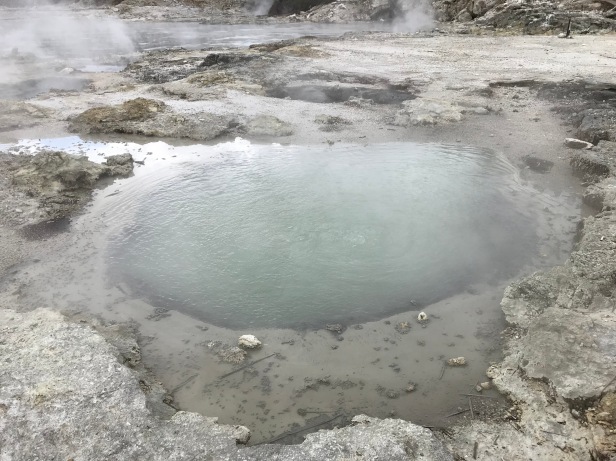 The place reeked of sulfur, which likely gives the water its soothing and healing properties. I noticed the smell soon after we arrived at the hotel. It was giving me a faint headache. I thought something had died in the air vents. And then it dawned on me that the whole town smelled as bad. And after a while I didn’t even notice the headache. Now the water temperatures in the park were much too high to endure directly and safely. So pools were built and water redirected to a more civilized setting.

This is not a photo I took since Fr. Kerry and I were in the pool, the farthest one in the background. I took this off the internet, and I don’t know the people in it. I also don’t recall how hot it was, but it was gooooood. We were only allowed in the mud for 20 minutes. Apparently, your insides start to cook after 20 minutes, which you won’t notice because it feels so gooooood. And it wasn’t really muddy. The water was murky and there was silt everywhere. That metal box behind the man on the right in the photo holds some of the silt that you can just pick up with you hands and smear all over yourself. At this point, who cares where it’s been. It’s volcanic and it’s mud. How much dirtier can you get? We were told not to get it in our hair and avoid getting it in our eyes, sulfur and all. And maybe 20 minutes is enough because that mud can get in the strangest places.

After 20 minutes in the mud, we washed off and jumped into the clear hot pool. I don’t recall if it was hotter or cooler. And you were allowed to stay as long as you wanted. But there was no returning to the mud, which I would have preferred. 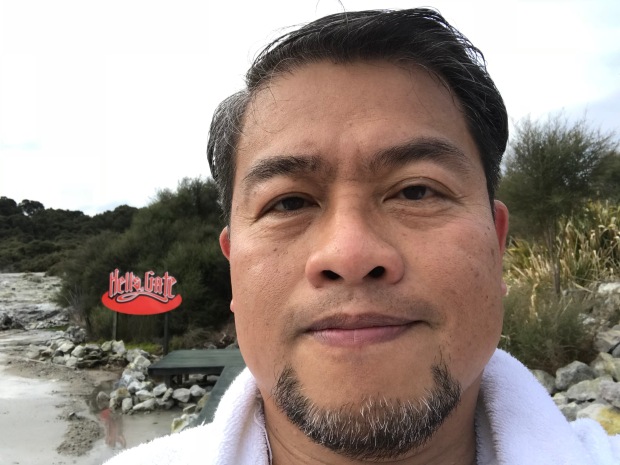 The sign in the background stands in the geothermal park which cannot be accessed from the spa. And if there were any health benefits to be gained from our hour-long visit (which felt really quick), I wouldn’t know. I would probably need to move to New Zealand and soak everyday for a few years before I even felt a difference. And I don’t think the Shenandoah Valley red clay would do the trick. Not even if you poured a bucket of Lysol in the pool.

On our way to dinner later that day walking around downtown Rotorua, we came upon this window. I just had to take a picture and post it. I leave you to contemplate that on your own.

By the way, the reason the geothermal park and hot springs are called Hell’s Gate (according to the park’s website) is because the Irish playwright George Bernard Shaw visited New Zealand for a week in the early 1900s and decided the thermal park to be the gates of hell that his theologian colleagues talked about. Shaw was an atheist, but apparently something changed about him after his visit to New Zealand. I bet it was the sulfur in the air. And the locals thought the name was badass enough, they decided to refer to it in English as Hell’s Gate.

After two nights in Rotorua, we made our way to Wellington.